I am interested in the general Italianate heritage of Wallington that is woven through its architecture, artifacts and historical narratives.  Connections to Renaissance and neo-classical ideals resonate throughout the house, appearing/reappearing in different and dislocated points of time. For instance, Bell Scott’s paintings adorn the inner courtyard, styled by John Dobson in 1854, as an ‘Italian Renaissance palazzo’; the inspiration for Lady Julia Calverley’s needlework screen was Wenceslaus Holler’s engravings for the 1663 edition of Virgil’s Georgics and Eclogues and Lady PaulineTrevelyan and Sir Walter Calverley Trevelyan lived for two years in Italy, collecting Old Master paintings to display at Wallington Hall.

The painting Untitled (green/grey II) echoes the pastoral artifice of Peirre-Antoine Patel’s “Landscape with Classical Ruins” that hangs above the fireplace in the library.
Patel’s painting of a bucolic and ‘picturesque’ scene represents an imagined, romantic idyll.  Paintings of this type became popular in the 17th century and although they reflected the tastes of the times, they were produced largely for an urban audience, or for those that had undertaken the ‘Grand Tour’. Such paintings also referred to an idealised vision of antiquity that was entirely fictional, but was rooted in a reverence for the art and mythology of classical Greece and the existence of a supposed ‘Golden Age’.

The work I am currently showing in the library combines references to 17th century Italian drawings, Rococo decoration, and abstraction. The image, frozen in a web of white paint on an abstract ground, is taken from appropriated and altered Baroque drawings and like Patel’s painting, refers to a displaced romantic and mythical ideal. 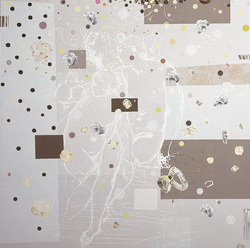 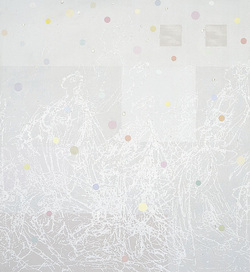