"No subject matter is too pathetic or too important."
Wolf Howard 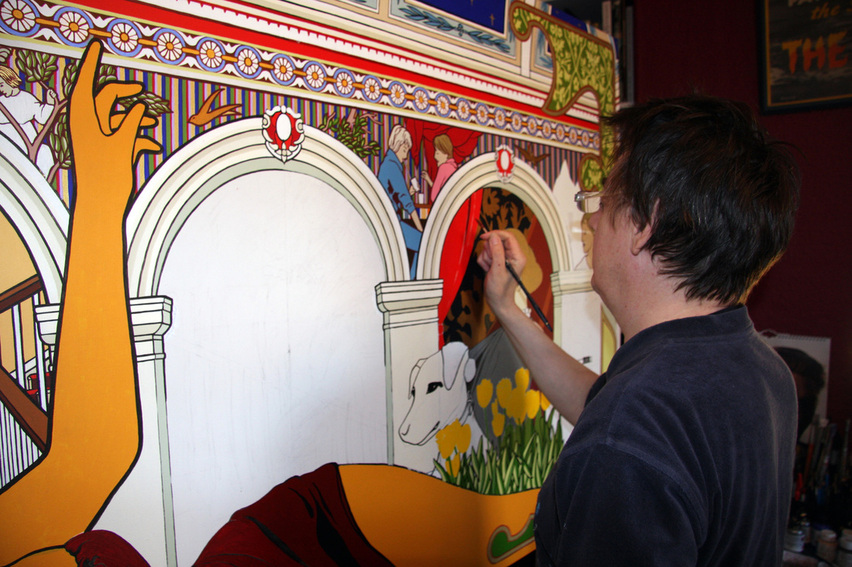 I will explore the idea of a ‘Stuckist Room’, possibly within the room currently used for temporary exhibitions. Stuckists do not do ‘installations’, nor are they interested in work that is ‘site specific’ but the idea of taking ownership of a room and decorating it with Stuckist work is full of possibilities. The Stuckist manifesto asks for:

exhibitions to be held in homes and musty museums, with access to sofas, tables, chairs and cups of tea. The surroundings in which art is experienced (rather than viewed) should not be artificial and vacuous.

Some connections: the Stuckist insistence on painting being “the medium of self-discovery” is a concept William Bell Scott may have identified with; the Stuckist show at the Walker Gallery in 2004, The Stuckists Punk Victorian, has close ties with the murals in the Central Hall (our manifesto celebrates artworks that have ‘unforgiving breadth and detail’); Stuckism promotes the idea of figurative painting and the Wallington murals are a popular acknowledgement of the power of this approach.

There are currently five paintings completed, exploring various aspects of the relationship between Wallington and William Bell Scott. 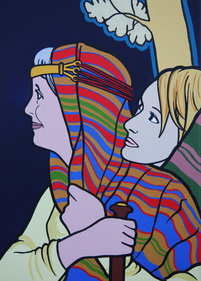 Bell Scott filled the paintings in the Central Hall with friends, acquaintances and benefactors. This tradition has been repeated in my series of works. In the detail from 'Mother and Child United' (left), my friend and work colleague, Kathy Bacovitch, can be seen with her mother  Sue Jensen, a many times visitor to Wallington. Mrs Jensen supplied rare books to help with my research, and here stands in for Pauline, Lady Trevelyan, a figure originally part of Bell Scott's painting 'The Descent of the Danes'. 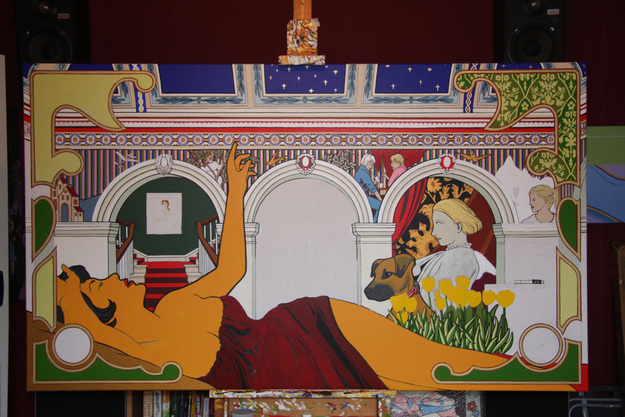 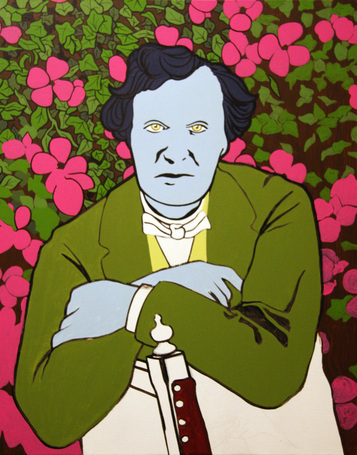 William Bell Scott is one of those individuals who look different in each photograph and painting sourced. Consequently this is more a psychological portrait than a physical one. It was also a final opportunity to have some kind of dialogue with him before the work is transported up to Wallington. 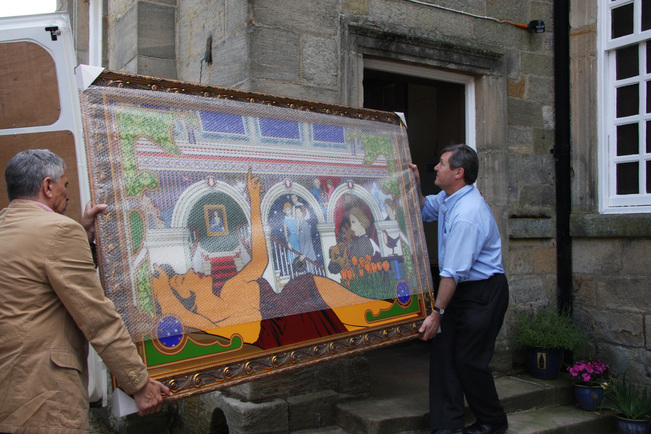 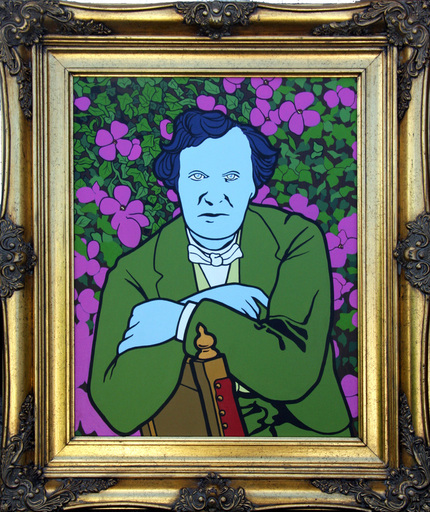 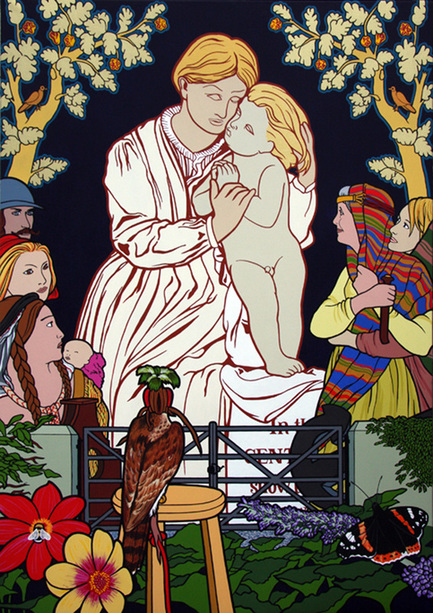 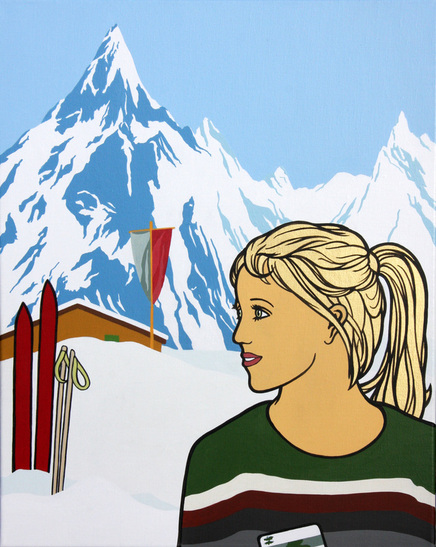 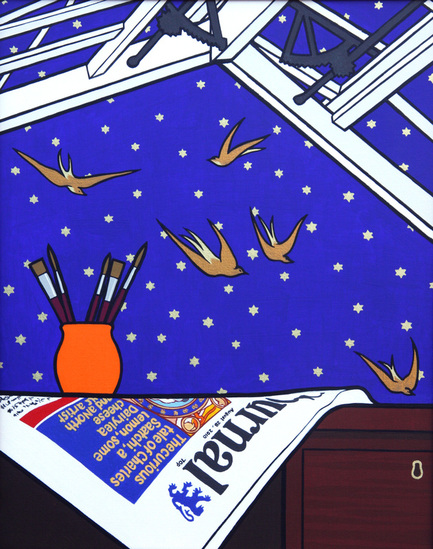 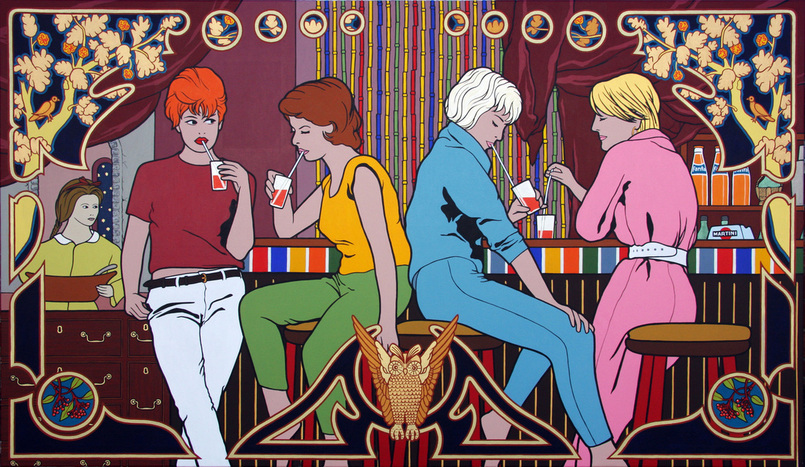 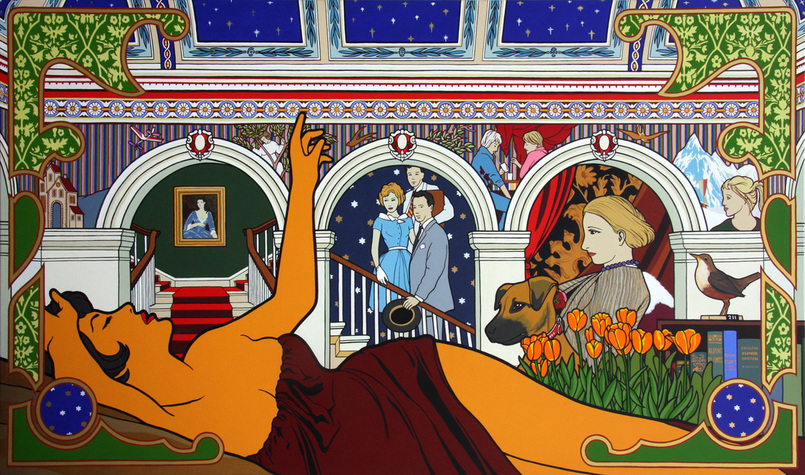 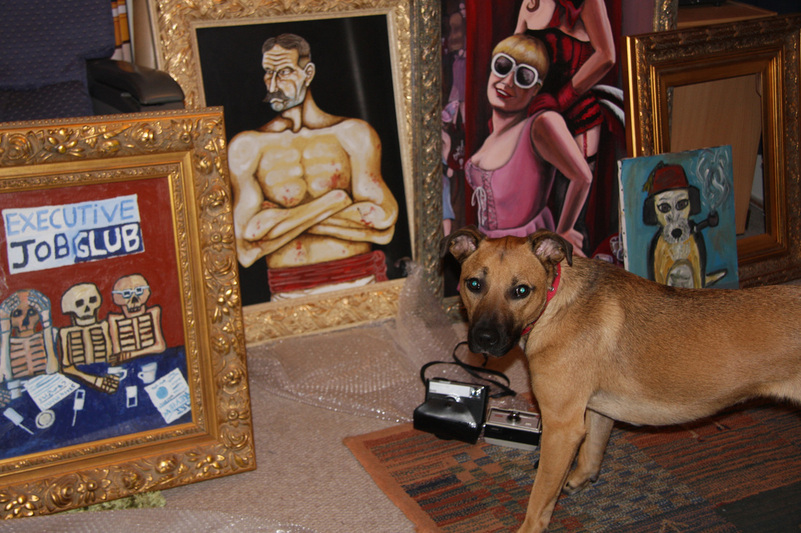 Work by other Stuckist artists featured in the show 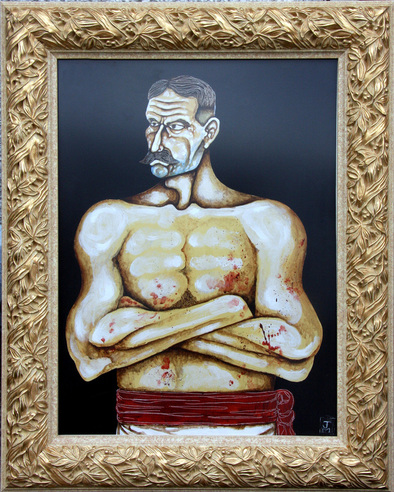 "I paint in a lean-to garage. I usually paint from sketches - mainly from life. I paint people I know or knew - it's heavily autobiographical. I use about five colours and mix them. Paintings are finished in a day or two. I've smashed up about half a dozen with pure anger at not being able to get what I want. Painting and writing have been far better for me than any of the mistakes I made in stealing and fighting." 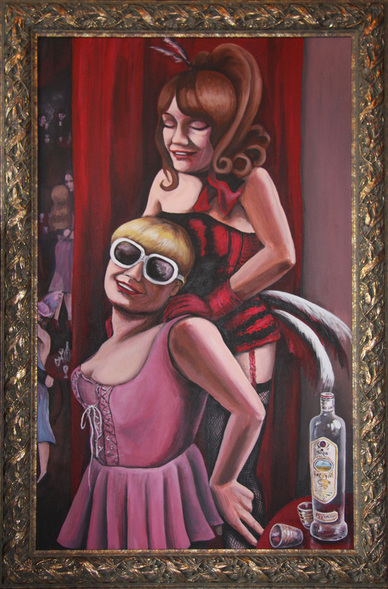 My paintings are about life. My life, friends’ lives and strangers’ lives. I paint a stranger I spot across a bar; a few months later we’re cycling around London, drunk, in rubber dresses – and this stranger is unmistakably a man. 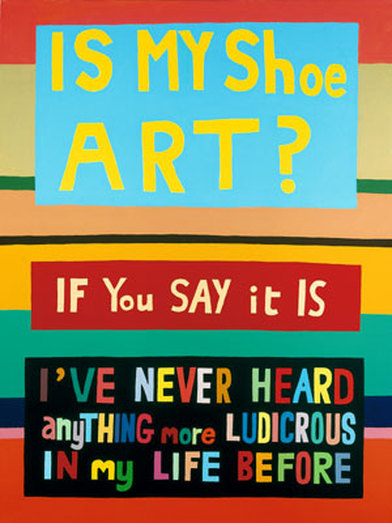 Is My Shoe Art Charles Thomson 1999

"I see my artistic influences from Japanese woodblock prints, Impressionism, Van Gogh and German Expressionism. I don't like Pop Art on the whole, because I find it uses the 'cartoon' style in a mechanical soul-less fashion. I depict what I experience as honestly as I can. This generates subject matter and style. I do line drawings spontaneously and uncorrected with a black wax crayon in a sketchbook. Then I choose one, blow it up on the canvas and paint the black line in acrylic. The colour is oil paint (Old Holland) and nearly always remains the first colour I paint in - though it can take an hour to mix it. I feel what the colour should be. The final image is a synthesis of material, emotional and spiritual experience. 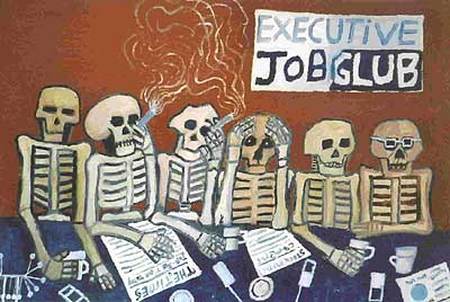 "I do lots of drawing from life. I've drawn continuously since I was sixteen. I like to watch cats moving and draw them. Then I enlarge the drawing on a photocopier and trace it onto the canvas using dressmaker's tracing paper. I usually paint 8-10pm every night: a painting takes up to a month." 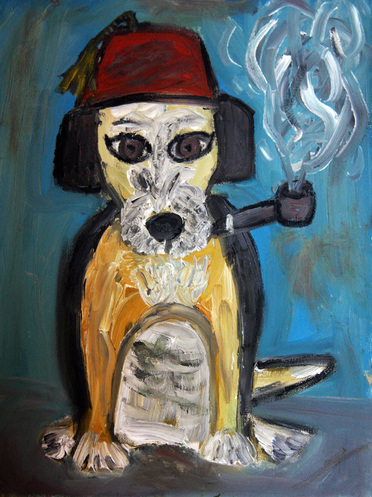 Smoking Dog Wolf Howard 2009
(Howard is a former Stuckist but occasionally exhibits with them. He is still a member of the Stuckist photographers)

"I paint with oils, covering the canvas as quickly as I can and sometimes returning to it many times until I feel it is finished. My paintings range from ex pets to world disasters. No subject matter is too pathetic or too important."

"I work from imagination and sketches from life. I draw on the canvas with charcoal before I paint and then try to get the whole thing finished in one go. It's frustrating to have to return to a painting many times before it feels right but I often have to. That's the most important part of growing as an artist and a person. I'll do the whole background before I can look at it and know it's wrong. Then I have to go over it or scrape it off. That can easily happen ten times on some of them." 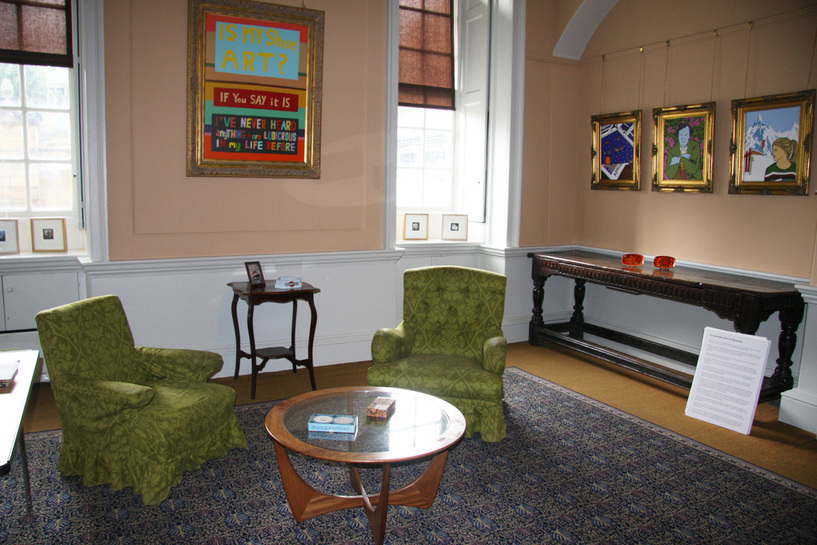 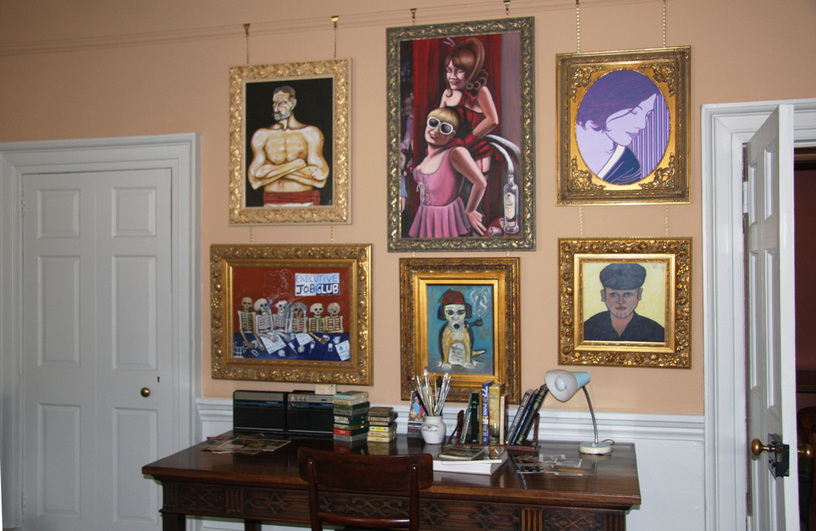