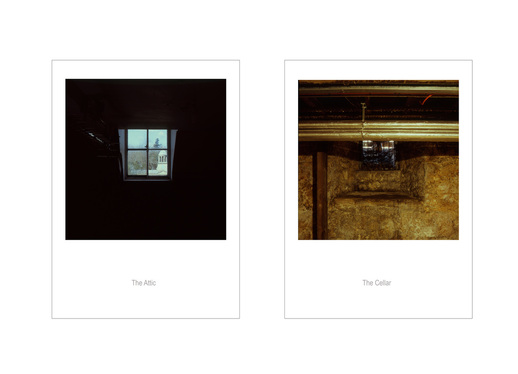 Aide Mémoire is a double-sided postcard that has been made for the exhibition Unfinished Business – A Contemporary Response to William Bell Scott that runs throughout the summer at Wallington.

William Bell Scott’s brief when commissioned to make his paintings for the newly constructed Hall in 1856, was ‘to illuminate the history and worthies of Northumbria’ and his chosen style reflected the contemporary Victorian appetite for combining myth, legend and historical fact in one grand-narrative.  The Central Hall itself had been recently converted by the architect John Dobson to resemble a courtyard from an Italian Renaissance palazzo; an allusion that, on a practical level, seems absurd in the climate of Northumberland but that, nonetheless, echoes similar acts of architectural appropriation found up and down the country during the Victorian period.   Bell Scott, Dobson, Ruskin and their patrons would have seen the ‘contemporary’ as the bringing together of different styles, aesthetics and time-frames to evoke feelings of regional identity underpinned with moral sentiments.  Therefore the structure of the house existed as a ‘canvas’ upon which these ideas and ideals could be drawn.

By contrast, as a contemporary artist responding to Wallington in 2011, I have focused on the enduring identity of the structure of the house itself with its mixture of private space and public spectacle. The Attic and The Cellar, depicted on opposing faces of the work Aide Mémoire, are spaces that quietly exist above the heads and below the feet of visitors to the property.  By making beautiful portraits of these two unglamorous and largely unseen spaces I am paying homage to the pure, persistent presence of the house.

These images, like William Bell Scott’s cycle of paintings, compress and combine different historical time frames, not through the use of dramatic narrative but in a quieter, more prosaic fashion.  Here we see the 18th century Bell Tower existing alongside the most ubiquitous indicator of modern technology, a television aerial.  The work is not straightforwardly documentary; instead the generic labels point us to a more generalized and possibly more psychologically charged reading of space.  Both attics and cellars are, after all, places where we put the things that we no longer want to use but, nevertheless, cannot throw away.

Aide Mémoire will be on sale in the entrance hall of Wallington House for the duration of the exhibition.