Unfinished Business
'I plan to display an installation of slip cast porcelain objects, including small boots, possibly in the room where there is a cabinet of curiosities. The boots were inspired by some work I have recently been doing with a group of Sunderland-based writers as part of my PhD project. The writers were invited to  look at the Sunderland pottery collection and create text which reflected contemporary Sunderland. One of them responded with the following poem which references the North East’s industrial heritage. The boots relate to the Bell Scott panel depicting ship building and industry.' Christopher McHugh

Pavements worn smooth and
shiny by the boots of the
shipworkers marching down
to work. Ringing now
with the echoes of the
spirits that rise with
the tide.

Background
Christopher McHugh studied archaeology at Durham and Cambridge, and was a Monbusho Scholar at Kyoto University, Japan. He is currently the recipient of an AHRC Collaborative Doctoral Award and is based jointly in the Department of Glass and Ceramics, University of Sunderland and the Sunderland Museum and Winter Gardens. The Community in Clay project, developed initially by the two institutions, aims to explore how an artist might use the museum’s world-class collection of 19th Century Sunderland pottery to engage and celebrate the local community for mutual benefit. This practice-based study will lead to the development of artwork, namely a “Sunderland pottery for the 21st Century”, as well as the establishment of a model of  practice for artist-led museum collaboration. 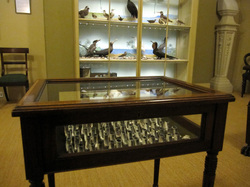 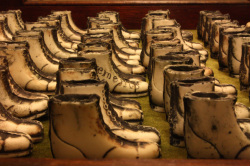 Initial 'Boots' installation where the boots were arranged in pairs. 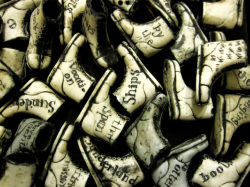 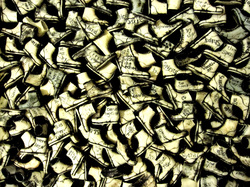