I have a pair of objects that are being slowly made right now that I think would create an interesting conversation if placed in the right locations. I was taken by one of the corridors on the first floor of the house that you are prevented from going down. I would like to put one somewhere in this corridor and the second one in a similarly cordoned off area in the grounds, be it a farmer’s field or area of woodland just outside the official boundary of the gardens, where for some reason everyone is not allowed to enter.

The experience of having access to but at the same time being denied full involvement with, is something I feel quite acutely at places like Wallington, be it with the objects in the house itself or the way of life that is being represented.

My objects are created from small sections of branch from two different variety of trees, that are bent and bound into a structure with no ends. They have been covered/clad with paper pulp, bound with string, painted, shot-blasted and waxed. The final elements are skins forced through the gaps in these forms to make taught extrusions that are cast and re-made in resin (similar to the work I had in 'Ballast', Gallery North, see image below). 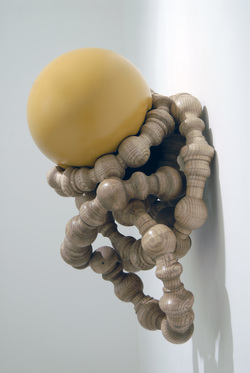 I think the work for this exhibition has something to do with things being made and un-made. 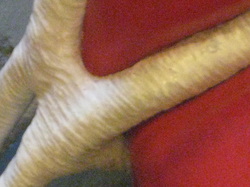 Details of work being made for exhibition. 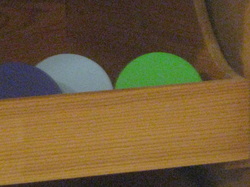 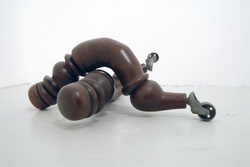 I think I might show a work made a while ago. Its called 'French Kiss'.